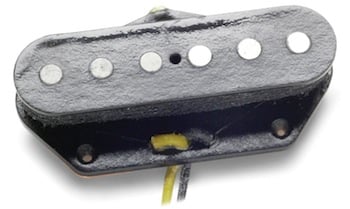 Guitar Wiring 101: For many players, a change of pickups is one of the very first steps into modding guitars. It’s reversible, it’s not too hard, and it has an immediate impact on your tone. However, it’s still possible to get yourself into a bit of a mess if you don’t have a basic understanding of why you’re doing what you’re doing. This is the first in a short series of blog posts that will take you from the very basics, up to where you will probably feel confident enough not only to follow the schematics you find on the internet (such as those found here), but to design and implement your own wiring schemes.

What a guitar amp actually does is amplify the changing voltage between two contacts enough that it can physically move a speaker. This is what turns the electricity into sound. The two contacts in question are the tip and ring of the jack cable you plug into the input on your amp. We usually call these two contacts “hot” and “ground”. The most basic piece of knowledge you can have about guitar wiring is this:

If the voltage difference between hot and ground is a constant zero,  silence is the result.

Note that this is different to when you plug a cable into your amp, but don’t plug the other end into a guitar (yes, we’ve all done it, even though our amp manual tells us not to). Then, you get noise. So if you plug into your guitar and you get absolute silence, you know you’ve probably got a short circuit.

Wiring a pickup
So now we want to make some noise. This isn’t an article on how pickups work, so for our purposes we will just acknowledge that the strings disturb the pickup’s magnetic field, which is then “read” by the coiled wire. This creates a series of voltage differences between the start and end of that wire, which correspond to the movements of the string, and thus the sound. To start with we’ll use single-coil pickups as they’re more basic. All we have to do is get that voltage difference (from here on in, we’ll call that voltage difference over time the “signal”) into the amp. This is a piece of cake. As you can see in this diagram, we simply attach the two wires from the pickup to the two contacts on the jack. It’s a convention that the black wire goes to the ground contact, and the white one to the hot contact. For this setup, that convention doesn’t matter much. But later in the series we’ll see why it is useful and necessary. Having wired this up, we have a playable guitar with one pickup and no controls. For some players, that might even be enough. But I have a feeling you’re not one of those players. And neither am I. Check in again next week and we’ll look at kill switches, volume controls and tone controls.

If you have any questions or comments so far then please bring them up in the comments. I will get back to you as quickly as I can!