At the end of the last post, we had a 1-pickup circuit with a volume and tone control. This time we’re going to look at multi-pickup systems.
So far we’ve had one pickup connected to the volume control and then the volume control sends output to the jack. We’ll continue with that setup, except that when we add additional pickups, we’ll control which ones are connected to the volume control. We can also take it as read that the ground wires from all pickups will go straight to a grounding point (like the back of the volume pot) without getting involved with any switching.
Let’s start with a two-pickup system, and a two-way switch that allows us to select between the two pickups. Schematically, the switching would look something like this:

When the switch is in each position, the respective pickup is connected to the volume control. This diagram would appear to suggest that while the switch is being moved, there would be a brief time when neither pickup would be connected. This would not be the case in reality. If we used a switch that worked like that, then the effect of moving the switch would be like unplugging the guitar and plugging it in again – and you’d hear a short silence followed by a pop (or perhaps a bang if you’re playing loud). So we would use a switch where both pickups are connected in the “in-between” phase of using the switch, to provide a smooth transition between sounds.
Now that we can switch between our two pickups, let’s advance to the point where we can also choose to have both pickups active at the same time. For this, we need a new type of switch. There are two types of switch commonly used for this purpose.
Blade Switch
This is the type of switch you most commonly see on Fender guitars. It usually looks something like this: The standard Telecaster switch is a three-position switch that is wired to give us the three combinations we want: neck pickup, neck and bridge pickups together, and bridge pickup. I’ll refer to these positions on the switch as N, M and B for Neck, Middle and Bridge.
The core of a blade switch is a mechanism that provides a “common” contact, and then a number of “switchable” contacts – in this case, three (one for each position of the switch). In each switch position, the common contact is electrically connected to one of the switchable contacts. This is usually called a “three-throw” switch.
Here’s a schematic of one of these switches, with the connectors N, M and B shown left to right. I’ve added in the neck pickup wire so that it will be active in positions N and M (indicated in blue for clarity, although in reality it would most likely be white).

Again, note that the contact will not fully disconnect between positions, but rather it will span both N and M briefly as it slides from one to the other.
Now let’s add in our bridge pickup wire (shown in red for clarity), such that it will be connected to the output in positions M and B:

Have you spotted the problem? We now have wires connecting all three positions on the switch to each other. In effect the three switchable contacts have become one, with both pickups connected to it. The result is that no matter what position the switch is in, both pickups will be active.
The way that this problem is solved is to add another switch, identical to the first one, but controlled by the same physical lever. So you have two sets of one common and three switchable contacts, completely unconnected to each other, but both switching simultaneously as the user operates the switch. Extra circuits controlled by the same switch are referred to as “poles”, so what we have now is a double-pole three-throw switch.
Now that we have this extra pole, we can use one for the neck pickup and one for the bridge pickup. We connect the hot lead from each pickup to a common contact on one of the switches, and then wire the appropriate switchable contacts to the volume control. This gives us our standard Tele switching system. Note that for this diagram I’ve turned the switches upside-down.

On a real blade switch, the two common contacts are on opposite ends of the switch from each other, but the switchable contacts are in the same order. So with everything wired in, it looks like this: 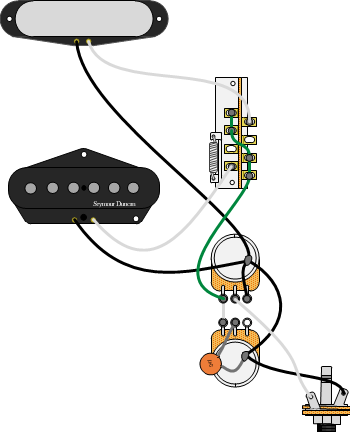 Note – if looking at these diagrams starts to feel a bit complicated, try ignoring all the black wires for a moment. They’re just ground wires and have little to do with the logic of how the circuit is put together.
Toggle Switch
This is the type of switch you would usually see on a Les Paul. Again, it’s two switches controlled by a single three-position lever, but the mechanics of it are different. Schematically it looks like this: 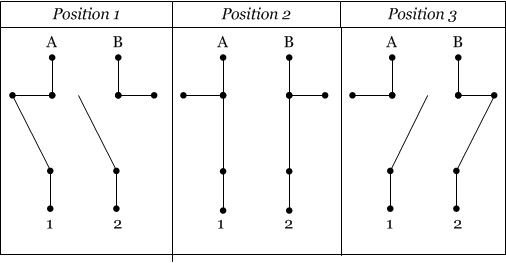 To get our neck/both/bridge selection working with this switch, all we need to do is connect one pickup each to A and B, and connect both 1 and 2 to the volume control. The toggle switches also usually have a ground connection to ground the metal parts. Wiring with this switch looks like this:

In the next part of this series, we’ll move on to controls that are selectively active – for example, the tone controls for different pickups on a Strat and the separate volume and tone controls for each pickup on a Les Paul.
Any questions so far? Are you getting it all? Let us know in the comments!