By the end of the last article on electric guitar wiring, we had wired a Tele-type guitar for three-way pickup switching using both the standard blade switch, and the Gibson-style toggle switch. We’re going to stick with that toggle switch now, and see how we can have separate volume and tone controls for each pickup. This is, of course, how a Les Paul is wired.

Remember way back in 102? We created a system with one pickup, one volume control and one tone control. Well, all we need to do is create two of these, and then use our toggle switch to control which one of them is connected to the jack! In the middle position, both pickups will be active, each still connected to their own volume and tone control, and in the other two positions, only one pickup and set of controls will be active. It’s as simple as that.

Check out the diagram – I’ve arranged it such that you can clearly see we’ve got two pickup systems, connected at the switch, and then flowing on to the jack. Again, if it seems complicated, try temporarily ignoring the ground wires.

(If you want to see the diagram laid out how it would be in a real guitar, it’s here) 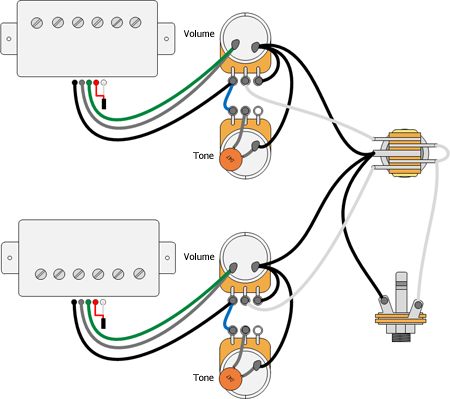 Note – You’ll see that the wires coming from the humbucker look different to everything we’ve worked with so far. I’m not going to go into details on this now, so I’ll simply leave it as this: first, we connect the red and the white together and tape them off. Then, for our ground connection, we connect the green and bare wires to ground (like the black wires from our other pickups). Finally, the black wire becomes our hot wire. When wired like this, a humbucker with all these wires can be treated like any other pickup with just two.

Using the same three-position switch from a Telecaster, it’s obvious to see that we need to connect one pickup’s output to each of the three switchable contacts, and then connect the common contact to output, like so: Note – this diagram doesn’t include the ground cables from the three pickups. These would of course all be soldered to the back of the volume pot to ground them.

You may have spotted that by connecting those two common contacts together on the switch, we’ve effectively turned it into a single-pole switch. We could have just connected those two tone controls to the left hand side of the switch, and left the right hand side unused. Don’t quote me on this, but I suspect the reasons that the switch was originally wired in this way are twofold: firstly, Fender already had lots and lots of three-way, two-pole switches in stock because they needed them for the Telecaster; and secondly, it’s easier to solder one wire to a contact than it is to solder two. If they already had those switches, why not make it easier to solder?

A common modification is to change the middle pickup tone control so that it affects the bridge pickup instead. This is done by simply moving the wire from that tone control to the location indicated on the diagram by the blue arrow.

Another thing to note on this diagram is that you may sometimes see guitars wired with the two wires indicated by the green arrow, switched. This makes no difference to the circuit, as turning the control simply varies the resistance between those two contacts.

As you now know, these blade switches never completely disconnect the common contact from everything, as that would create unwanted noise. On the Telecaster, this didn’t make any difference to the operation of the switch. However, when the Stratocaster was released, using the same switch, some players noticed an interesting sound during the switch from one position to another. The reason for this was that two pickups were being connected at the same time. These sounds quickly became known as the “in-between” sounds and became very popular. Eventually Mark Knopfler was to become almost synonymous with the sound. Players used various methods to achieve these sounds – some stuck a match stick in the switch to stop the switch flipping to one of the indented positions; others modified the switch to have two additional indents in between the existing ones. Finally in 1977 Fender made the five-way switch a standard part. It’s the same switch, just with more indents.
What does this mean for our wiring? Well, nothing actually. It means that the five-way switch wiring is exactly the same as the three-way switch wiring, because the five-way switch is just a modified three-way. So your wiring diagram for a modern Strat looks just like the one above – or, if you prefer to see it laid out matching the physical locations of the components in the guitar, like this.

Final Exam
Only kidding. I hope you’ve found this series of posts useful. You should now be able to wire a Tele, a Strat and a Les Paul, either from reading – and understanding – a wiring diagram, or perhaps even working from first principles. And hopefully when you look inside your guitar, what you see won’t be such a mystery.

Pretty soon we’ll be exploring electric guitar wiring beyond the standard stuff you get in off-the-shelf instruments. There’s a whole world of tonal possibilities out there.

As always, if you have any questions, please comment on the article and I’ll do my best to help you out.