Most guitarists have enough struggle with one neck. However, there are times when you might have to play guitar and bass in the same song, or play delicate fingerpicked intros on a 12 string, and rock out with a great big Rockin’ Guitar Solo on that 6-string in the end. Perhaps you have developed a technique that requires tapping on two necks at once, or you just like the feeling of dislocated discs that comes with using a multi-neck guitar… hey, we don’t judge!
Back in the Third Decade of Rock (the 1970s), there was a whole host of players that created music requiring different tonal changes that could not achieve them with guitar effects available at the time. Some used a double neck for different tunings, some used the multi-necked guitar as a novelty to bring out for a song or two in the set. This is my list of multi-necked mavens who inspired players to not only push guitar design, but actual playing, in multiple directions. 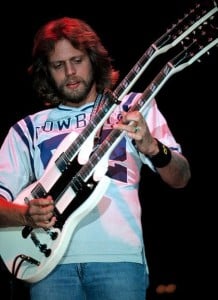 Don Felder owns lots of guitars. But he wouldn’t be known for using a doubleneck Gibson EDS-1275 if early MTV hadn’t played the Hotel California video several times a day for a few years. Now it is impossible to think of him playing that song with any other guitar. A true play for the song player, Don seems to always put the notes in exactly the right place, with every solo having its own mini-melody that sticks in your head. It is a shame that many know him just as “the doubleneck guy in the Eagles”, because he contributed a lot to rock guitar before and after. However, if you ever find yourself with a 12-string and a capo, due to Felder’s Law, you are legally required to play a D and then an F#7 chord. Another guitarist famous for his vintage guitar collection, Rick Nielson is another guitarist should be known for a lot more than “the guy with that 5-necked guitar”. The guitarist in Cheap Trick for decades, Rick’s custom 1981 Hamer includes a 12 string, a 6 string, a 6 string with a whammy, another 6 string (because, rock n’ roll), and a fretless 6 string. Rick came up with the idea of a 5 neck instrument as he would strap on many guitars at a time during his solo spot, and then take off one at a time and play the one underneath. Why not have all the guitars occupy the same space? While his back may disagree, no one at the time had seen anything like it. The visual was perfect for Cheap Trick’s catchy power pop, and it is still a hit every time he brings it out.

Who says you have to hold a pick with one hand and fret with another? Who says the necks have to always face the same direction? Leave it up to shred king Michael Angelo Batio to push shred into 4 directions. He even needed a custom Dean guitar to do it with. It is pretty amazing to see in person, and could easily be dismissed as a parlor trick if he wasn’t so good at it. MAB’s Dean Double & Quad (!?!) neck allows him to play ambidextrously, fretting above and below the neck. He plays these in unison and in harmony, but he is no 4-trick wonder: He plays conventional guitar quite well, too. Here is his double neck playing, which showcases his shredworthiness: Steve’s multi-neck playing is just one facet of what he does, but his use of 3-neck guitars is why he is on this list. Steve Vai’s Heart Guitar was first seen in a David Lee Roth video, but it evolved into a unique instrument featuring a 12-string neck and two 6-string necks. The 6-string neck facing away from him usually has a capo, and is tuned to a chord, while the 12 string doesn’t use a capo, but is also tuned to a chord. Of course, it is painted bright pink to make it easy to see from the back row. The whole instrument itself seems heavy and awkward to play, but Steve makes it look easy. In the early days of Genesis, Mike Rutherford had a problem. He was the band’s bassist, but he wrote songs on guitar. His guitar playing was unconventional, as he often played 12-strings with vastly different tunings for each song. Live, these altered 12-string tunings blended with the guitars of Steve Hackett and the sometimes-guitarist-but-mostly-keyboardist Tony Banks to create a wall of of sound impossible to recreate any other way. Mike needed a way to switch between bass and these differently-tuned 12-strings, so he teamed up with London-area builder Shergold Guitars to build him a custom doubleneck. This instrument’s bottom neck was the bass, and the top neck could slide out and be replaced with a few different 12 string necks in different tunings. While playing the 12-string neck, he often played bass…with his feet, via bass pedals. It may seem just another one of prog rock’s caricatures, but Rush really needed these to pull off many of the songs on their 1977 epic, A Farewell to Kings. As Rush moved into the 1980’s and concentrated on shorter, simpler songs, they didn’t break out the the doublenecks as much, and an accident to Alex Lifeson’s Gibson ended Rush’s first doubleneck era. Still, 3 people onstage with 4 necks can make a lot of sound.  I wonder how many cover bands bought a Gibson EDS-1275 and a Rickenbacker 4080 bass/12-string just to play Xanadu? Spinal Tap’s Derek Smalls knows how big a 4/8-string B.C. Rich Bich Bass can sound, and when added to 3 other people in the band playing bass, you have a band with the biggest bottom around. In a band known for their excesses, it only makes sense that they would use a bass with more knobs-per-square-inch than anything currently available. It all adds up to a sound you can love each weekday, each velvety cheek-day. Exxxxcellent! Steve Howe makes my list even if he only used a Gibson EDS-1275 for a few tours in the 1970’s. The fact that he used them on And You And I & Starship Trooper from the concert film and triple album Yessongs ranks it high on my list. Steve is known for a variety of guitars, but in the 1970’s, when acoustic amplification was still in the dark ages, he approximated the deft fingerpicked passages with Yes on the 12-string side of his Gibson, while rocking out with the 6. He plugged his doubleneck into a wah, fuzz and Echoplex Groupmaster before hitting Fender Dual Showman amplifiers. He now performs these songs with his Gibson ES-175, with a Line 6 Variax guitar on a stand for the acoustic parts. No one has sold more doubleneck guitars than Jimmy Page. When you buy one, I am pretty sure they make you sign a paper that states you must play The Song Remains the Same and Stairway to Heaven every time you lift it from the case. Very few images in rock music are as iconic as Jimmy Page prowling across the stage with his cherry red Gibson EDS-1275. In the studio, he used a Fender electric 12-string, but to get the right sound live, he chose the doubleneck. Certainly it was the right choice, since it is now the first image many guitarists think of when they talk about doubleneck guitars. Yeah, lots of older guitarists would put Page at the top of the list, and a lot of younger players might be scratching their heads. But to me, Johnny Mac gets the top spot. While not known for using a doubleneck now, McLaughlin got his first big break with jazz icon Miles Davis, before starting the most terrifying jazz-rock band of them all, the Mahavishnu Orchestra. Combining the music of the East with jazz harmony at deafening volumes through rows of Marshall stacks, the Mahavishnu Orchestra was an instrumental supergroup that utilized ultra-fast unison lines across mesmerizing polyrhythms. In the beginning, McLaughlin utilized a white Gibson EDS-1275 but later switched to an ornate, custom made Rex Bogue guitar. Called the Double Rainbow, Mclaughlin used this guitar with the Mahavishnu Orchestra until it fell off a bench and split in half. To me, no one has rocked so hard with as many notes on a doubleneck since.

Have you ever played or owned a multi-neck guitar? If you picked one up, what would be the first song you’d play?