A Gibson Les Paul, SG, ES-335 and many other guitars use a two-pickup/four-pot setup: two dedicated volume controls and two dedicated tone controls. The tonal possibilities are almost endless if you know how to dial it in right, and the tireless tinkerers among us have tried several ways of hooking up the pickups to the pots over the years. That might sound strange because you might think there’s just one way to wire it all up, but clearly there are more roads that lead home! Let’s take a closer look at the various ways you can wire up your four-pot guitar.

Before we really dive into new wiring possibilities, let’s quickly recap what a pot is and how it works. The word ‘pot’ is shorthand for ‘potentiometer.’ Structurally speaking, a pot has one large resistor inside with a start and an end (which we see as the outer lugs on the casing of the pot). That part doesn’t move when you turn the knob. What does move is a bridge, which is connected to the middle lug. It moves over the resistor and acts as a bridge between the signal and the output or ground. If it’s on the far side it bridges the signal to the ground, shorting the signal and creating silence. On the other side, it bridges the signal directly to the output of the pot without any signal going to the ground. Every position in between allows some part of the signal to go to the ground, in essence lowering the volume.

The ‘traditional’ way of doing things is to hook up the signal to the outer lug, and by using the middle lug (the moving part) you can dial in how much of that volume you want. In this case, the pot works as a power divider. But it can be done in a different way. If you hook up the pickup to the middle lug, the amount of load ‘behind’ the input is what causes the decrease of volume when you roll down your volume. This wiring is called the ‘independent volume mod,’ because in the middle position you are now allowed to dial in the exact tone you want without sacrificing volume. In theory this might sound neat, but it does take out a huge amount of your high end. 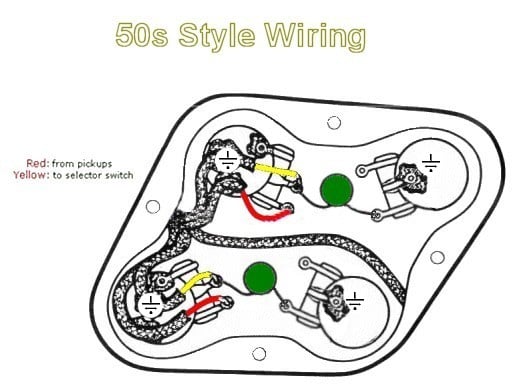 The Les Paul 50s wiring is what it’s actually all about. That particular schematic focusses on the tone pot/volume pot relationship. As with the volume pot, there are two ways of wiring up the tone pot. I’m not talking about the entire filter (there are more ways that lead to Rome!) but how the two are connected. The modern way is to hook the tone pot up to the outer lug of the volume pot. The 50s version is to wire it up to the central lug of the volume pot. Is there a ‘best way’? It really depends on your guitar, pickups and playing style. The modern version will maintain the overall volume better when you roll down the volume but at the cost of losing a bit of high end. If you have a bright pickup that may not seem that bad of an idea, because with less volume and the same amount of treble the tone might be too piercing. On the other hand, the 50s version keeps the amount of treble the same but drops a bit in volume as soon as you roll down the tone pot.

What you might prefer is very much subject to personal preferences. I’m very fond of the Les Paul 50s wiring myself. Once I discovered it, I modded almost all of my guitars to have this version. The highs seem to be clearer, especially with the volume pot rolled back.

If you want to read even more about the different ways of wiring up a tone pot, click here. For information on guitar pickups for Les Pauls, check out these articles:

Choosing A Bridge Pickup For Your Les Paul