I always wished to own a Telecaster, but after having tried over 20 guitars I still was without a Tele! So, I decided to build me one. I started out with Allparts parts though, since I don’t have the time (nor capabilities) to really build from scratch. I have the theory that you want a thick maple neck and medium heavy, medium dense ash for a body. The maple will give the bite, and the thickness will give you some lows. The body though will have to be dense enough to keep up with the treble and upper mids the Tele should have, but open enough to give it some smoothness. I got this theory after playing a lot of Teles. The ones with the highs I liked had a full maple neck and a medium heavy and medium dense ash body. The ones with a thinner neck had too much bite and the ones with a lighter ash body were too ‘kind’ sounding, not dirty or raunchy enough.
In this little series of blogs I’ll show how how I came about to constructing the guitar. It’s a lot of fun to make your own ‘partsocaster’, and franky, it’s quite easy too! I will show you through some choices I made and how I solved some issues. My goal was to get a guitar that plays well and sounds good. Looks were absolutely not an issue. When I choose the body I took the one that had the best tap tone, but unfortunately there were many chips on the edge of the body. Thats why I got it, thankfully, for a very low price. Some manufacturers of guitar parts have extremely high tolerances of their products, so if you were to buy a body by Musikraft or Warmoth, chances are the edges won’t be chipped as it was with mine, and the hardware and neck have a near perfect fit. But of course, I made the specific choice to go as cheap as possible with the best (tonal) results as possible. I could have used putty and fillers to fix the chips, but in my opinion those things only degrade the tone and that was a compromise I was absolutely not willing to make. Let’s first clamp up the neck. A piece of scrapwood to protect the frets. The final alignment of body and strings will happen with the placement of the  bridge. 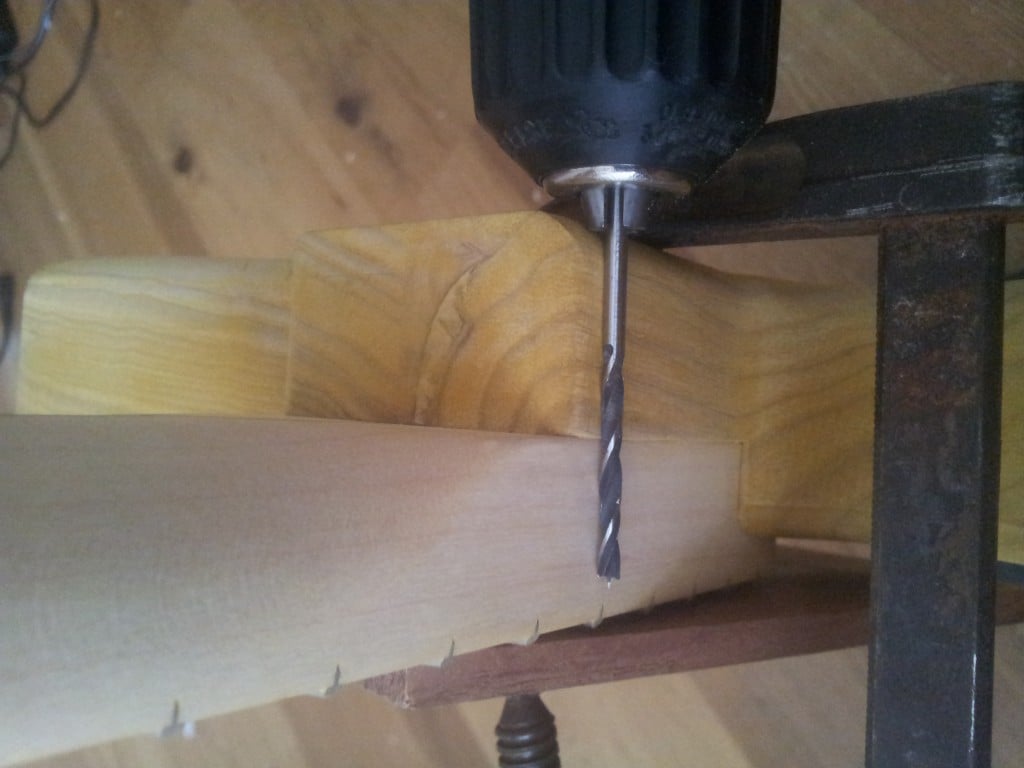 Now, measure how deep the drill bit can go at the maximum. Your carefully selected, hand picked neck can be reduced to waste if you drill through the fretboard. I measured the thickness of the bit to match the screws I’ll be using. This can differ with each brand, and to each his own discretion (some prefer thicker screws, other slightly thinner). Neck is pushed to the bass side of the pocket to maximize wood-on-wood contact. The first hole is drilled accordingly. All four holes are done! The circular indentations you see near the holes are a result of the washers I used when I first on the pieces for the first time. And the result: four screws with washers. I chose washers over a neck plate, partially because I don’t like the look of a plate but also because washers are cheaper and allow for a bit more flexibility if I choose to reshape the heel for easier access. A nice, tight fit of the neck.
Next time, I’ll take a crack at the tuners. I explicitly didn’t sand the body to remove all the scratches, dings and nicks. Sanding would’ve taken away not just too much wood but would have really changed the shape of the guitar. It’s almost a shame that this ‘ugly’ body had the best ‘tap tone’ and conversely, the best chance of producing the sound I was looking for, of the bunch I tapped, tested and probed.